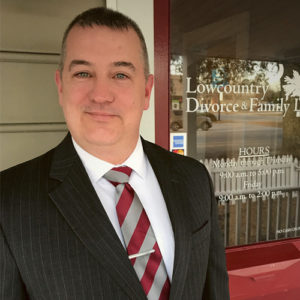 Martin Murphy was born and raised in Philadelphia, Pennsylvania. He served as a police officer for twenty years in New Jersey before retiring to the Palmetto State in 2016. Murph is a 1993 graduate of La Salle University with a Bachelors in Criminal Justice. He attended Rutgers-Camden School of Law at night while still working as a police officer. After hanging up his gun belt and badge, Murph worked as a municipal prosecutor in five New Jersey towns, and was named one of South Jersey Magazine’s Awesome Attorneys of South Jersey in 2015. He has served in the Army Reserve and the Army National Guard since 1992, with deployments to the Middle East and the former Yugoslavia. Murph serves as the Secretary of the DCBA.

Murph lives in Moncks Corner with his wife and son, as well as a pit bull named Two Face who refuses to believe he’s not a lap dog. He likes to spend his free time working on his wife’s honey-do list, occasionally playing a disgraceful round of golf, and faithfully following the Eagles, Phillies, Sixers, and Flyers.